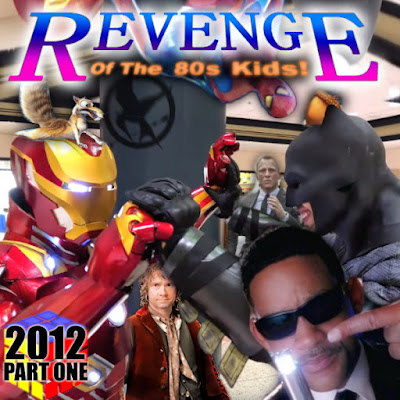 There are two ways to look at the Top 10 movies of 2012 for franchise fans there was a total buffet of above-par iterations of their absolute faves. The first big-screen MCU crossover event dominated, of course, but then the Anniversary Bond was snapping at its heels with the Dark Knight rising to put in a creditable third helping before the DCCU well... you know.

Then there's the rest of the list... The Hobbit, lumpy and grumpy and overstuffed. Ice Age and Madagascar for the kids, isn't that tantamount to neglect? The Twilight franchise delighted millions around the world, by ending. Spider-man was maybe just a touch too Amazing. There were 3 Men In Black, although two of them were the same and there was some timey-wimey stuff and well, then everyone fell asleep, by themselves, not because of some weird flashlight. Although, I have to say I still wonder if MiB3 was just a hallucination brought on by a gas leak.

Nestled in amongst this volley of re-boots, crossovers, sequels, warmed-over-bull-doody and completely unnecessary and unwanted disappointments was the upstart Hunger Games franchise opener. It was a time when many people could legitimately say they wanted to rock up to a movie about kids given weapons and told to jolly well murder one another and still say "What the hell's that" when you offer to put on Battle Royale.

2012, with a few notable exceptions, was a bit of a hot mess at the top end, but, at the same time, it was a glorious year for cinema. No wonder people were too confused to make Dredd the box office success it should have been. More on which next week...

This episode uses an excerpt of Raindrops by Predator Technique