Episode 102: Hellraiser - Cinema Release For Some, Straight To DVD For Others 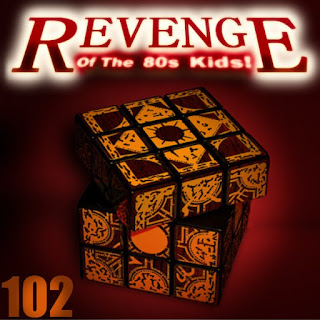 The Hellraiser series is an odd duck. A film series that has, over the years, churned out movies featuring that most iconic demon/angel with a love of S&M who cares not for the 'safety word' as he carries off for torture any who have been foolish enough to solve a certain puzzle box.

The films have wavered in quality for arty reactions against the mindless slasher genre to patchwork visions of hell to actually being a mindless monster movie before becoming a property that while yearning for another 'Must see' entry in the canon seems to flounder every time and could be argued fares much better as something roughly jammed into a horror script that wasn't even supposed to feature them.

And so a strange chain of 9ish movies stretching from our 80s home land and into more or less modern day lies before us, and while fan differ on exactly where the golden era exactly falls the jumbled sequence of largely unsynchronized films and DVDs seems to hang together as a body of work, where a wild and fascinating mythology seems to emerge between the cracks.

Realizing there's always safety in numbers the 80s kids have enlisted the aid of horror enthusiast J R Park to help as they navigate their way through one of the most fascinating franchises out there. Hellraiser films good and bad take us between ultimate pleasure and ultimate pain. To think... we hesitated... Incidental Music by incompetech.com