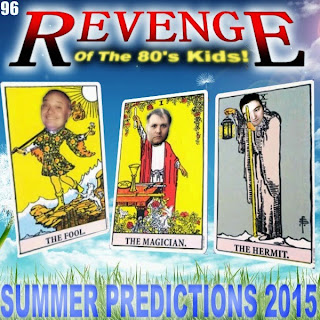 Not content with having plenty of time to consider their choices before being wrong the 80s Kids went onto Google Hangouts on 7th March 2015 to be wrong before an audience of their peers.

Never has inaccurately taking a punt about what may or may not be a big hit/massive flop at the pictures been so... immediate. Across the categories of Sci Fi, Action, Childrens, Comedy and Horror the 80s Kids try to foresee the summer's big hitters and find one wretched turkey in the pile. Have they actually managed to get anything right except for the unremarkable statement that Avengers: Age of Ultron might be a bit of a thing?

Well, they managed to ignore the Pixar movie and Disney's Tomorrowland altogether. This should give you an indication of how close their finger is to the pulse. Really we all just tune in to this just so we laugh that little bit harder in October when the Summer Review comes out, aren't we? And how much sweeter as that show will most assuredly be a live webcast as well! Enjoy.