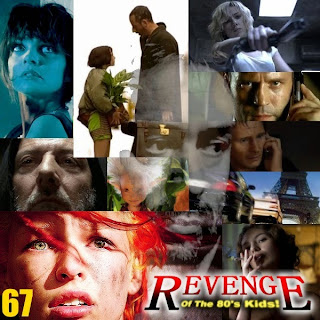 In a show shockingly, not to say "schlockingly", ripped straight from the headlines the 80s kids draw back the veil on a world of explosive action, magnificent martial artistry and death defying parkour when they open up the CV of euro-trash producer par excellence Luc Besson.

The kids are Transported into the murky world of District 13 where the Kiss of the Dragon could be Unleashed. Will they send back a coded message through the Lockdown barrier From Paris With Love regarding The Fifth Element or will they be Taken too soon?

But if you thought that guns, car chases and ridiculous plot twists was all Mssr Besson had to offer then you might be in for a surprise. Gasp along with the Kids when they discover exactly how busy the head of Europa Corp was in 2005, and marvel as he takes the directorial reins whenever he suspects that another director might just stuff up another one of his trademark strong and empowered female characters.

Indeed the 80s kids have a particular set of skills, those being to poke around in the career higlights of one of the hardest working figures of modern cinema. You'll need 100% of your brain capacity to contend with the broad ranging versatility and artistic agenda placed front and center. So grab hold of your multipass and let's hail an insane Taxi ride into a cinematic universe of glorious continental B-Movie madness.