Episode 127: Conan The Footloose and The Iron Tower 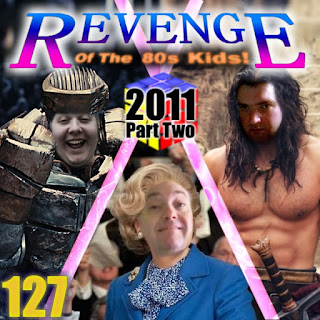 If you tuned in last week then you'll get the picture here right away. 2011 was a year that, cinematically, mostly happened around the edges. Nothing in the Top 10 was breaking new ground or enticing the keen movie-goer with more than the promise that you were getting something where you knew what it was. All the action was happening outside of the big box office.

Maybe part of this was down to the death of wave-1 3D where 3D was slapped onto everything whether it warranted it or not and a few titles, Drive Angry I'm looking at you, were only released cinematically in 3D for no good reason whatsoever. Thankfully, however, where the 80s nostalgia was strong, 3D was seen as an unnecessary distraction from all the AWESOME 80s ACTION. At least, that's how we're choosing to read it.

In some ways the 80s wasn't so strong with 2011, a Conan reboot attempt, a Fright Night remake, a Footloose remake and the prequel to The Thing makes a solid if unremarkable effort. But then we did get a Margaret Thatcher biopic thrown in the mix and, despite not being genre, that makes a solid 80s foundation to show the decade where all the best movies happened is still present in spirit.

In a way, though, the very best 80s stuff was in the films that hadn't forgotten the spirit of the 80s whether that be in the robot karate kid form of Real Steel, the Eddie Murphy starring heist in the tower or the "Yoot On Bikes" alien invasion comedy Attack the Block. Whichever way you slice it the spirit of the 80s was strong in 2011 and that's just the way we kids like it.

This episode uses Excerpts of John Bartmann's My Time Done Come, available on Bandcamp and used under a Creative Commons License