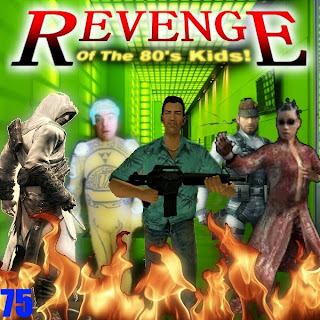 With our humble show progressing into the 2000s, Leo's thoughts turn to Video Games and the growing blur between what is a 'Cinematic Experience' and what constitutes a 'Game Experience'. In the days of old 'Story' and 'Character' were something of the text heavy RPG variety, be it the Story Rails attached to a turn based combat system or the 'point 'n' click' puzzle game. Then all of a sudden the consoles suddenly got just complex enough that game designers could treat us to lengthy engagingly acted cut scenes that assured us our tough guy with guns was three dimensional beyond his polygon count.

Suddenly games could be immersive and engaging worlds and the player could at last experience something like actually being there. Some games based on film franchises dispensed with retelling an actual film and instead set their stories in 'Officially Licensed' enclaves of their movie universe's canon. Others built their own universes, now followed and wiki'ed with detail orientated enthusiasm by passionate on-line communities.

This week the 80s Trio reflect on the memorable video games they played that crossed the Story - Game divide. From the PS1 classics to the roaring days of the PS2 and Xbox, to the rise and fall of the MMO and to the modern Video Game triple A block busters.