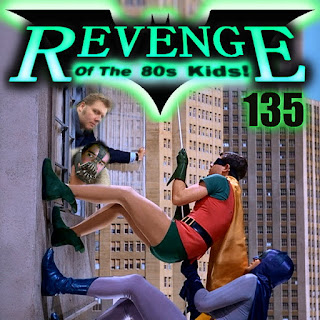 When this episode was just a glint in the eye of the 80s kids we were aware that the "Joker" movie existed and that there was some "buzz" associated with the property. When we recorded the episode Joker was still a couple of months from general release. So, that will explain why we miss the opportunity of discussing how irrelevant Batman has become to Batman related properties.

After the Dark Knight rose we, of course, got Batman vs Superman: Dawn of Irrelevance, a guest spot in Suicide Squad, and then, inexorably we went towards "Justice League". Ben Affleck got the filthy end of that particular stick and no mistake whatsoever. Suicide Squad, in fact, represents the last time to date that a movie has actively tried to pull eyeballs by mentioning the presence of one caped crusader.

Of course, there's the Lego Batman movie... but does that really help? Add into the mix the presence of a non-verbal Bats in Teen Titans Go To The Movies and the proud absence of bat iconography emblazoned upon the face of popular TV epic Gotham and a pattern begins to emerge.

You thought, no doubt, that Batman was waiting in the shadows, ready to strike at any time. Now you're beginning to suspect that those shadows are bat free and you're locked up all alone with the cowled one's gallery of sociopathic opposition. Who will save you? The 80s Kids? Nah, mate, we're just here to discuss matters and confirm that you, like Batman, are probably screwed.

Email ThisBlogThis!Share to TwitterShare to FacebookShare to Pinterest
Labels: Batman