Metasode 7 - One Of Us Doesn't Like Movies Any More 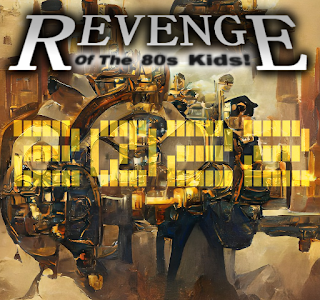 I think we were hoping to be going out on slightly more of a high in this episode. Geek Towers is a thing, our new format is great, we've got our heads around the new tech. We have battled and emerged victorious. Surely we should celebrate? 2022 looks like it could hold a real re-surgence for the 80s Kids, and indeed it could, but there will be some shocking twists and turns in the evolution of the 80s Kids to make this happen.

For now, Leo and Ian turn their own view in a different direction. They've been around the "new content" blocks enough times to understand that when they do something new for the folks at home then it has to stick within some fairly rigid existing rules. But is it time to bend some of those rules to breaking point? Very probably. It's going to be an interesting new year people.


Direct Link: hhttps://archive.org/download/metasode-007-one-of-us-doesnt-like-movies/Metasode-007-One-Of-Us-Doesnt-Like-Movies.mp3
Posted by Leo Stableford at 15:00 No comments: 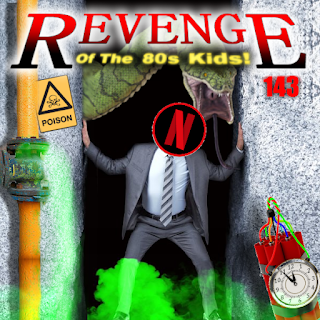 I mean this one's a no-brainer, surely?

The streaming juggernaut that is Disney+ rumbled onto instant global domination in March 2020 and since then it has wound it's content production up to deliver a series of high-profile body blows to the competition in the form of desirable franchise goodies dripping with loving care and high production values. The pace doesn't seem to be dropping, no, indeed, it's picking up. Everyone should be worried.

Actually the two parties who should be worried in particular are the UK's Now TV whose content delivery potential has been stripped back severely losing primary delivery of Disney and Fox content libraries and, of course, Netflix who are now trying to carve out a brand that offers counter-programming to Disney's slate of super-popular franchise fare and edgy drama (on Hulu in the States and inside the Star section of D+ elsewhere). We haven't forgotten Prime Instant Video but Amazon delivers content as an after thought, not as a primary goal, so it seems. Of all these, then, Netflix seems like the one that's in most trouble, Now TV is just an offshoot of a satellite TV provider, Amazon couldn't really care less but Netflix, it has to fight for it's very identity and it can't just be a constant diet of Squid Game, can it?

This week's episode features an excerpt of Lo-Moments by Skipless and bedding music Moon Forest (threads version) by 4T Thieves. Both are licensed under a creative commons non-commercial attribution-based licence. Follow links for more information.


Direct Link: https://archive.org/download/143-netflix-is-screwed/143-Netflix-is-Screwed.mp3
Posted by Leo Stableford at 15:00 No comments: 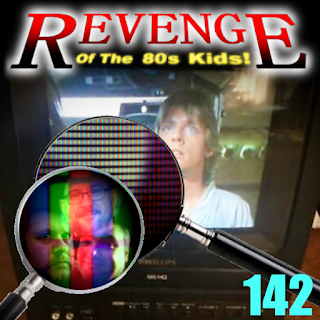 This week's show is all about the fact that we find ourselves in a world where home entertainment is available in a number of different flavours, DVD, Blu-Ray and UHD for physical, and then the digital counterparts. Marketing will tell you that you always want the 4K version of everything, after it got done telling you DVD was over and everything had to be in Blu-Ray 1080p

To borrow a popular Thor meme

This week the Kids from the 80s assert that Just Like Heaven and the Lego Movie are never going to be better than they are at 576p (which is great but more definition does nothing to improve matters), Big Trouble In Little China and 12 Monkeys definitely look better at 1080p and 4K, well that seems to be a gimmick for Denis Villeneuve movies. Let's not even hunker down and consider how the definition of what even is 1080p varies wildly between a lovingly crafted prestige Blu-Ray and a cheeky Netflix stream, actually no, let's for a second. It's techie week on the 80s Kids and things have never been clearer, or sharper.

This week's episode features an excerpt of Speak Easy by DarkSunn and bedding music Lost in dam central vs Exist by Planet Boelex vs Data Rebel. Both are licensed under a creative commons non-commercial attribution-based licence. Follow links for more information. 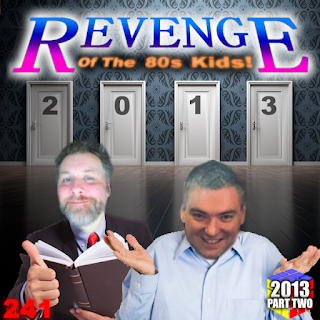 Sometimes, from the ashes of disaster rises a Phoenix of Wonder...

Then, sometimes we lose the recording of an entire show and have to come up with something to re-cover the same ground and then Leo gets over-excited and goes off on a tangent. Welcome to Choose Your Own 2013

Within this show those sunny days of the early teenies have been re-formed into a piece of interactive fiction and Ian picks his way carefully through the tricks and traps, all the while trying to work out what films have been referenced along the way. Welcome to 2013 the Adventure Game.

This week's episode features an excerpt of The Andromeda Strain by 2 Bone Giants and bedding music Pherek kyson by MigloJE. Both are licensed under a creative commons non-commercial attribution-based licence. Follow links for more information.

Email ThisBlogThis!Share to TwitterShare to FacebookShare to Pinterest
Labels: 2013, Choose Your Own Adventure, Disaster, Replacement, Tangential 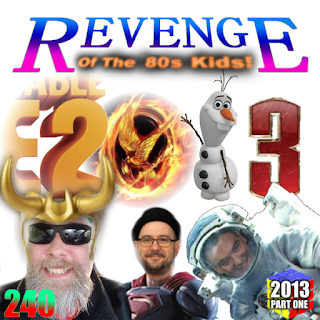 And Lo, the circle was complete. The Kids from the 80s form an ourobouros this year as they consider the top 10 movies from the year 2013, among other things that drift into our field of view.

We are blessed, on the one hand, by the presence of Mr Mike Nudd this week, who is on hand to offer his opinions on that all important 2013 top 10. As we are blessed, however, so are we also cursed upon the other hand for we only had to strong arm a guest appearance because we actually recorded the whole show once and then, like idiots, failed to download the recording in time.

Even so, we manage to give the Top 10 of 2013 a thorough kicking in this episode, from Hunger Games to Minion filled animations to Superhero movies galore, we run down the hit parade and marvel that Fast and the Furious 6 was in even as we marvel that Star Trek Into Khanness was out. There's not a lot to surprise here and still fewer giant mechs lamping seven bells out of kaiju and, honestly, that still smarts to this day.

This week's episode features an excerpt of Innereyefull - Back Then and bedding music XHD by Aydio. Both are licensed under a creative commons non-commercial attribution-based licence. Follow links for more information.

Email ThisBlogThis!Share to TwitterShare to FacebookShare to Pinterest
Labels: 2013, Frozen, Gravity, Iron man 3, Man of Steel, The Fast And The Furious, The Hunger Games, Thor 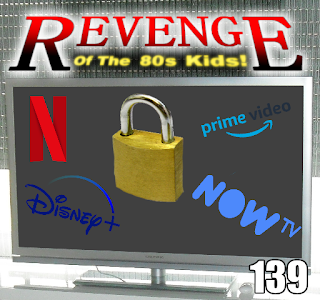 Following on from last week's Autopsy on all things 2020 we turn to the obvious question. If all the cinemas were shut what did your average cinephile do for entertainment whilst locked up in their homes for several months waiting for an end to the global pandemic?

In Ian's case the answer is "not watch much on telly". In Leo's case the answer is: watch a bunch of stuff that was hurled in our general direction as a way of keeping us distracted as the world collapsed outside the window. So, different approaches, very different. But the underlying question is what did all the streaming services actually do with this literally captive audience? What was strewn before us to while away the long hours? How did the movers and shakers entice the idle and bored into their gardens of content?

It may not surprise you to learn that the answer is... virtually nothing. As you shall discover, not one of these companies really had the muscle to throw out something seriously arresting, compelling and noteworthy during this time. I guess you just don't have to work as hard when you've got no competition. Oh, well, sigh... best wait on for the cinemas to opern up again.

This week's episode features an excerpt of Ego Trippin' by Lo-Fi Scientists and bedding music Mystical Forces by Citizen Crane. Both are licensed under a creative commons non-commercial attribution-based licence. Follow links for more information. 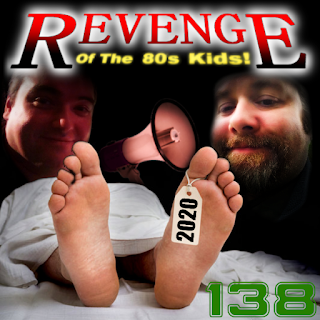 AUDIO QUALITY WARNING: We were using a platform, since abandoned for precisely this and other technical niggles, that, unfortunately, made Ian sound like he was addressing us from the body of a large an empty church (I, Leo, am assuming it was a technical error and not something I need to stage an intervention for). So, sorry about that folks. Honestly, if we'd have screwed up like this on a topic show we probably would have re-recorded. But the autopsy relies on a certain amount of live reaction from the Ian, so we have had to issue as is. We have totally fixed this audio issue in all the rest of the shows in this season.

Now, on to the show. 2020, that was a bit of a shock, wasn't it. We recorded a prediction show in Fedbruary and by April it was all moot. But that is not the end of the story. All the films we talked about, slated for release, existed. They had been filmed, they were ready to go. Marvel's Black Widow wasn't just going to disappear into the infinite, it was going to see the light of day at some point. Similarly DC's Wonder Woman. Similarly Fast & Furious 9 and so to the autopsy.

We examine the fate of those movies which we predicted for in Feb 2020, a different world. Have the films been released? Where were they released? How much money did they pull in when they did get released? And obviously, what does all of that mean for the future of cinema in our mixed up, disease-riddled world of today? We don't have answers but suffice to say we're retiring the predictions format for a bit.

This week's episode features an excerpt of Swag Rag by Riff Kitten and bedding music Everybody Has Another Life by Fodor Balazs. Both are licensed under a creative commons non-commercial attribution-based licence. Follow links for more information.